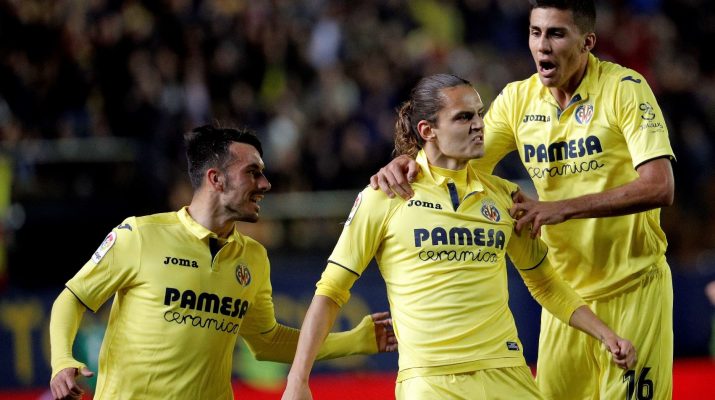 The Turkish striker cancelled out Antoine Griezmann’s first half penalty in the 82nd minute, before firing the Yellow Submarine into the lead in injury time

Antoine Griezmann opened the scoring from the spot, before Enes Unal netted a late double, as Atletico were reduced to ten-men in the closing stages.

Diego Simeone’s men almost got off to the perfect start within the first minute, but Saul Niguez’s strike was well saved by Sergio Asenjo.

Carlos Bacca then threatened to score for the home side, but he was denied by the outstretched arms of Jan Oblak who prevented the ball from nestling in the bottom right corner.

And the Yellow Submarine were made to rue that missed chance, when Antoine Griezmann dispatched a penalty in the 20th minute.

The French forward converted the spot-kick low into the bottom right corner after he drew a foul from left-back Jaume Costa.

, before Dani Raba and Pablo Fornals wasted glorious chances for Javier Calleja’s side as they pressed for an equaliser.

Angel Correa then thought he had doubled the scoreline for Atletico, but his shot sailed inches over the bar in first half injury time to cap an action-packed opening period.

Villarreal started the second half on the front foot, with Mario Gaspar foiled by the hands of Oblak, before Manu Trigueros saw two strikes whistle just wide of the post.

Griezmann then fired high over the bar in the 70th minute, as Atletico looked to close out the match.

But it was Villarreal who was to get the all important goal as cheers were heard from Barcelona.

Turkish striker Enes Unal rose highest to head home in the 82nd minute, as the substitute got on the end of a fantastic whipping delivery from Alvaro Gonzalez.

Unal, Bacca and Daniele Bonera then all spurned chances as Villarreal went in search of a winner.

And Unal then sent the home fans into delirium as he fired his side into a 2-1 lead in the 91st minute.

And the drama didn’t stop there as Madrid were reduced to ten men in the 93rd minute after Vitolo was shown a second yellow card.